Captain Pierre Davis has over 29 years of service in the Seattle Police Department.

Davis has worked as a patrol officer, detective, first line supervisor and mid level manager in the West, South, Southwest and East Precincts, Narcotics, Gang Unit, Felony Fugitive Unit, Office of Professional Accountability, and Traffic Enforcement Unit. Most recently he served as the Operations Lieutenant in the Southwest Precinct.

His formal field of study was in Mechanical Engineering Technology, and he attended the West Point Leadership College, as well as Police Administrations Courses at the University of Washington.

“I am one of a great many officers that was recruited from the community from which I resided. I proudly come from a long list of friends and relatives whom have served the Seattle Police Department with pride and dedication.” 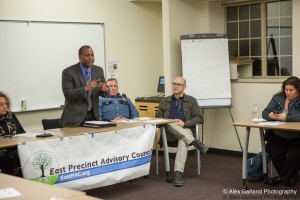 Davis mets community members from his precinct at last week’s EastPAC session. A big crowd showed to talk about the City of Seattle’s work to stop the renewal of the Waid’s nightclub liquor license (Images: CHS)

Newly promoted Captain Pierre Davis has been at the helm of the Seattle Police Department’s East Precinct for five weeks, meaning he’ll have to stick around just a couple weeks longer to outlast his predecessor. After Mike Edward’s short stint as Capitol Hill’s captain, Davis said he is settling into the job and getting ready for a the usual uptick in criminal activity as longer days and warmer temperatures approach.

“These things happen,” Davis said about the recent captain shuffles from inside his East Precinct office, as the sounds of a daily officers’ ping-pong match echoed in the background.