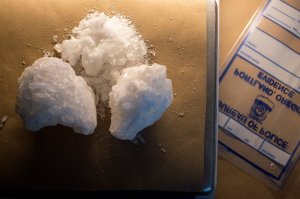 PORTLAND, Ore. — They huddled against the biting wind, pacing from one corner to another hoping to score heroin or pills. But a different drug was far more likely to be on offer outside the train station downtown, where homeless drug users live in tents pitched on the sidewalk.

“Everybody has meth around here — everybody,” said Sean, a 27-year-old heroin user who hangs out downtown and gave only his first name. “It’s the easiest to find.”

The scourge of crystal meth, with its exploding labs and ruinous effect on teeth and skin, has been all but forgotten amid national concern over the opioid crisis. But 12 years after Congress took aggressive action to curtail it, meth has returned with a vengeance.

This dedicated officer is incredible with an outstanding performance Bio…

Perry Tarrant joined the Seattle Police as an Assistant Chief during the Department’s DOJ Settlement Agreement. He was part of a White House law enforcement advisory committee created by President Obama and chaired by Vice President Biden. He presented before Congress on civil rights, hate crimes, community policing, use of force, and 21st Century Policing. Additionally, he serves on the Executive Board of the National Organization of Black Law Enforcement Executives (NOBLE) and was elected its President for 2016 and 2017. He is a member of the Breakfast Group and Red Tail Hawks, which are local community organizations focused on youth mentoring. He is also serves as a board member of Choose 180, a program that works to keep youth out of the criminal justice system.

Assistant Chief Tarrant received his Master’s Degree in Public Administration with a Leadership Emphasis from Northern Arizona University, and his Bachelor of Arts in Political Science (Minor in Counterterrorism & Human Migration) from The University of Arizona. He holds additional academic certificates in Criminal Justice Graduate Studies from the University of Virginia and a Certificate of Study in Human Trafficking from The Ohio State University. He has completed the FBI National Academy, the Senior Management Institute for Police, and NOBLE’s CEO mentoring program. He is a FEMA Incident Commander and provided leadership for National Special Security Events such as national political party conventions, G-20 summit, and Unified Command for Super Bowl XLVIII.